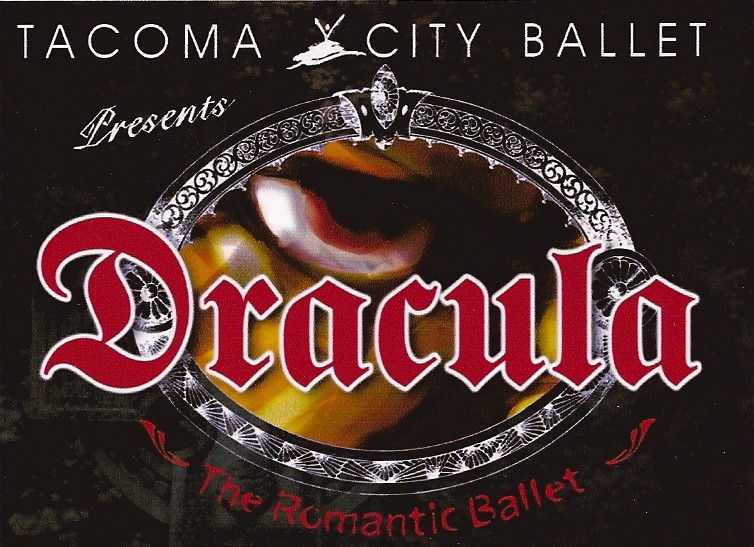 The Tacoma City Ballet is thrilled to premiere Dracula—The Romantic Ballet—an original ballet fashioned from the legend of Vlad the Impaler, Count Dracula of Transylvania.

The expression Dracula, which is now primarily known as the name of a fictional vampire, was for centuries known as the sobriquet of Vlad Dracul III (“Vlad the Dragon”). Vlad the Impaler is a brutal but tragic character who became the immortal vampire Dracula out of his love for his deceased wife, and shows his actions as Dracula to be his own personal war against God for denying the entry of Elisabeta’s soul into heaven, mixing historical fact with the fiction.

Over four hundred years later, Vlad meets Mina Harker, who he believes to be the reincarnation of Elisabeta. Dracula’s intention is to turn Mina into a vampire so they can be together as husband and wife for eternity, as he and Elisabeta were meant to be. Chased by vampire hunters, Dracula is mortally wounded. Mina provides the finishing blow, reverting him back to his human form, which allows him to die. Through Dracula’s death, Mina is freed of the vampire’s curse.

Featuring fabulous dancers, a brilliant musical score, opulent scenery, and luxurious costumes, Erin Ceragioli, Executive/Artistic Director of the Tacoma City Ballet, envisions that Dracula will be for Halloween what the Nutcracker is for Christmas; as well, her big picture plan is to pair the ballet with a masquerade ball.

Dracula is suitable for audiences of all ages, and the perfect addition to your celebration of Halloween. Audiences are encouraged to come in costume.

The Blood Bank will be on hand in the parking lot accepting blood donations.