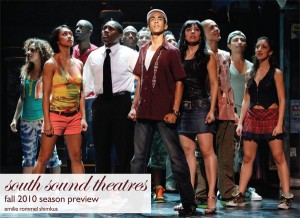 2010 marks a big year for many of our South Sound theatres, with special anniversaries, new partnerships to celebrate, and a stunning array of ambitious productions in the works. Big, splashy musicals? Victorian thrillers? Family ties and the never-ending search for identity and community? From Olympia to Seattle this fall, a Big Night at the Theatre will be all about Big Ideas.

And at Christmas time, put that remote down and walk away from the TV! All across the South Sound, theatres present new holiday classics in live song and dance—all brighter, merrier and more twinkling than Technicolor.

The fall season kicks off with a Big Idea and a double dose of inspiration: Both Olympia’s Washington Center for the Performing Arts and Tacoma’s Broadway Center for the Performing Arts are known for serving up a veritable feast of music and dance spectaculars. This year, both venues will dish up a special treat with the critically acclaimed musical, The Color Purple. Based on the Pulitzer-prize winning novel and the unforgettable film of the same name, The Color Purple celebrates the power of love to conquer despair, violence and oppression. You’ll be touched, both by the story and the joyful score filled with ragtime, jazz, gospel and blues.

For the Washington Center, this production of The Color Purple is the first of three big shows touring nationally and landing in Olympia. In January and February, don’t miss the Broadway favorites The Wizard of Oz and A Chorus Line (all touring shows are special short engagements, so get your tickets early). Looking ahead to the New Year at the Broadway Center, get ready for Spring Awakening, the ground-breaking, adolescent-angst, rock musical—and winner of eight Tony Awards.

This fall, Harlequin Productions celebrates its 20th anniversary season by shaking up the classics. The season begins with an exciting new adaptation of Dr. Jekyll & Mr. Hyde. If you think you know the dark tale of man’s battle with science and morality, think again. Six actors will transform into twenty-one different characters, including four different versions of the menacing monster, Hyde.

The Harlequin’s annual Shakespearean production, The Taming of the Shrew gets an American Western make-over. Sweet Bianca is rarin’ to get hitched, but Dad won’t consent til sister Kate finds a fella who can handle her. Can a rough n’ tumble stranger bring the stubborn Kate to pasture? Don’t bet on it, pardner.

Even Charles Dickens gets a boost, with A Stardust Christmas Carol. The latest installment in the wildly popular Stardust series is set in post-WWII Manhattan, back in the ol’ Stardust Club. Come for the swingin’ tunes, and stay for a zany spin on the ghosts of Christmas past, present and future.

Lakewood Playhouse spices up their traditional fall mystery with a new play featuring some old friends: none other than Holmes and Watson themselves. Written by a Western Washington playwright, Sherlock Holmes and the Doom of Devilsmore gives Holmes fans a brand new mystery to stimulate the grey matter.

Speaking of old friends, cozy up to your favorite angels and shepherds when Lakewood brings you The Best Christmas Pageant Ever. Is it possible for a few kids to ruin an entire church pageant? (Hint: In the UK, the original title is “The Worst Kids in the World.”)

Starting early this fall, Tacoma Little Theatre’s season takes on mystery, musicals and… a spelling bee? First up, the two-man cast for Sleuth sets the bar, leading you through the ultimate cat-and-mouse game. Two mystery writers, deadly rivals and the perfect murder—but for whom?

Another intimate production of an entirely different nature follows: Eleemosynary (pronounce it “el-ee-mos-y-nary”) explores the complicated ties between three generations of exceptional women. A mother, daughter and spelling-champion granddaughter learn to trust and to take a chance together.

TLT ends the season with a bright, shiny bang— Annie tells the famous story of the spunky orphan with heart. Even in the depression years of New York, Annie reminds us all to stand up for our dreams… after all, “Tomorrow’s only a day away!”

Further north, Seattle’s landmark 5th Avenue Theatre is celebrating its 30th Anniversary Season! The fall line-up is a perfect representation of their 2010-2011 season, which includes new works and classic favorites.

The party starts with In the Heights, a Tony and Grammy award-winning musical set in Manhattan’s Washington Heights. It’s a vibrant urban community, where big dreams mingle with old traditions and the characters are ready for change. But what do you take with you and what do you leave behind? More importantly, what do you make your own?

The 5th’s holiday show can answer one of those questions: What do you take with you? Your Red Rider BB Gun! Get ready for A Christmas Story: The Musical!, the brand new stage adaptation of a popular American tradition. It’s Christmas in the 1950s, and 10-year-old Ralphie will do anything for that perfect gift. All your favorite moments are there, along with a new score and—are you ready?—a leg-lamp chorus!

Whether you’re brushing up on your classics or looking for new favorites, you’ll be sure to find it on a South Sound stage this fall. The coming season is packed with heart, courage and magical storytelling. Big Ideas? You bet… an array of shows to captivate any audience.