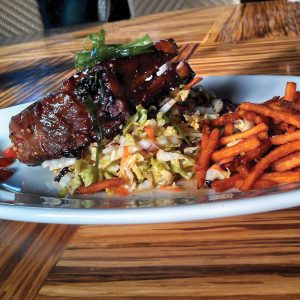 Everything on the menu at Crockett’s Public House in Puyallup contains the same special ingredient: exceptional effort.

Owner Shaun Brobak and Executive Chef Brian Johnston share a passion for quality food made without shortcuts, so almost as soon as the business opened in February 2011, it stirred up excitement. In came the customers and out came the reviews. The Puyallup Main Street Association honored Crockett’s Public House
as Top Chef at the 2012 Wine Walk and Taste of Puyallup. Next, Guy Fieri, host of the Food Network program Diners, Drive-Ins and Dives paid a visit with his film crew, featuring Crockett’s in an episode to be aired in 2013.

“I was super excited, very, very excited,” Johnston said. “The main thing about Crockett’s that makes us different is just the effort we put into everything. That’s what got me to come to Crockett’s to start with.”

Johnston’s determination to use only the best products means they must special order many of them and regularly drive to Seattle for others, a distance of over 70 miles round trip. “Most restaurants don’t do that,” he said. “If they have trouble getting it, they won’t use it.” For french fries, he insists on a superior potato variety called Kennebec, which makes the fries come out more crisp and golden. Cod is from premium loins, not tails. Chili-braised chicken—one of many filling choices for the Mexico City Street Tacos—starts with a whole chicken.

The “Public House” in Crockett’s name could be deceiving. “It’s not geared toward drinking,” Johnston said. “It’s geared more toward family. We have some unique spirits and beers, but the focus is definitely on the food.” Make that the highest quality food.

“It’s a constant effort,” Johnston said. “It’s a challenging job. But we have been well received and this is a very positive thing.”

Filed Under: Best Of, Cuisine