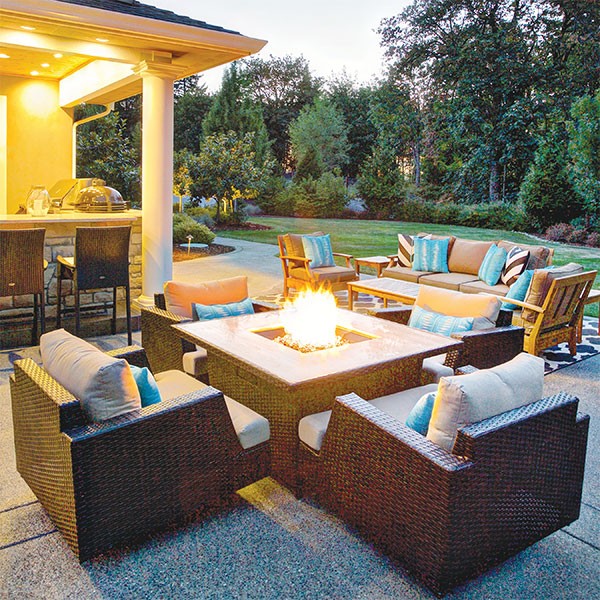 Eight years ago, Troy and Becky Rucker called Olympic Landscape for landscape design and installation. In the next month, a conceptual plan was developed with the homeowners’ input, and the landscape work began in October 2008. Since the Ruckers’ home was under construction, Olympic was in on the entire design-build process from the beginning and proposed upscaled entry walks and a reflection pool to the work the builder had in mind.

Work took place during the fall and winter months and by late winter the major part of the project was complete, including sprinklers, lighting, plants and lawns. The Ruckers participated in all phases of design and construction, which is exactly how Olympic Landscape likes to work. “It’s very rewarding to have the homeowners engaged in the process,” says Olympic designer John Sullivan.

In turn, the Ruckers enjoyed their participation with Olympic. “They were thoughtful, great at planning and phenomenal in making the plans work in the real world,” the couple says. “The installation was impressive to watch, considering the many site challenges they had to overcome.” The crowning glory? “We especially love the grand entry and the fountain courtyard, with the night effect of up-lighting.”

The Ruckers were so pleased with the effect that was achieved and the service they received that they called Olympic Landscape a couple of times over the years to add to their landscape. The most recent visit was to install historic Wilkeson paving stone around the courtyard fountain.

Troy and Becky Rucker are among the many customers who see the value in Olympic Landscape’s 40 years of experience. According to owner Neil Hedman, Olympic offers an array of services to support the planning and building of your landscape. In-house design teams work closely with professionally trained technicians to provide a seamless transition from Day One to the realization of your landscaping dreams. A large part of the company’s success can be attributed to Hedman’s oft-repeated phrase: “We love what we do!”