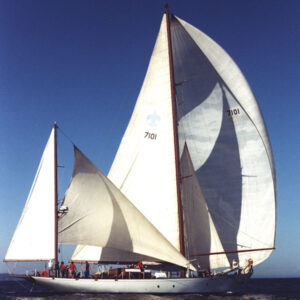 The Odyssey, a 90-foot sailboat, was designed by Olin Stephens and built in 1938 by the Henry Nevins Yard of New York for Mrs. Barklie Henry, a member of the Vanderbilt family. As a pleasure vessel, Odyssey quickly proved itself as a winning member of the racing community of Long Island Sound. The family also sailed it down to the Caribbean for visits with Ernest Hemingway.

By 1942, the U.S. Navy acquired the Odyssey and renamed it USS Saluda. It was painted standard military “haze” gray, converted to diesel auxiliary power and put into service in October 1942 at Port Everglades, Fla. The Navy assigned it as a research vessel for its underwater sound laboratory. It was used for radar and sonar testing when American shores and ships were at high risk of attack from German U-boats.

Now named the SSS (Sea Scout Ship) Odyssey, Tacoma’s own “tall ship” is recognized nationally as a premier youth sailing programs vessel. The Odyssey is the largest youth sailing ship in the South Sound and one of the largest Sea Scout ships in the United States.

After decades of valiant service, however, the main engine on Odyssey has died. The timing couldn’t be worse since the Odyssey’s mainsail developed a massive tear during a recent high wind. Without a mainsail or motor, the Odyssey and its youth sailors are stuck at the dock of the Tacoma Youth Marine Center. Senior Skipper Bud Bronson says, “The task of getting a new mainsail and a new engine at the same time is unanticipated and practically overwhelming for us.”

Odyssey is operated year-round by 68 local youth and about a half dozen adult volunteers. The ship typically sails 185 days a year. Today the young men and women who care for it and train aboard the Odyssey are mostly idle. But one 15-year-old Sea Scout says, “While we look for the funds we need, we are also working, scrubbing, sanding and painting just about anything that doesn’t move.”

Local marine suppliers are helping out, but the crew still needs additional funds to replace and install the necessary equipment. On behalf of the Odyssey crew, the Tacoma Youth Marine Foundation is asking for help from the community to get the Odyssey powered up and sailing again.