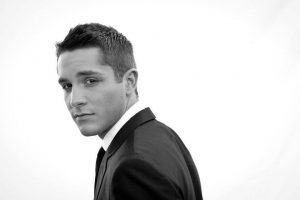 When he began singing as a busboy at Jebino’s restaurant in Eatonville, Chris Anderson never imagined his career would catapult, seemingly overnight. Drawing inspiration from musical idols such as Bobby Darin, Elvis Presley and Frank Sinatra, Anderson creates a sound all his own and has been sharing it at venues all over the state. We recently had a chance to speak with him about his success and what lies ahead for the budding star.

Coming from a musical family, I have always been a fan of music. It wasn’t until age 18, however, that I became interested in pursuing it as a career, which, ironically, was the first time in my life that I sang a note in a manner in which I was trying to actually sing well. Growing up, I was too shy to even think about doing anything musical, but after I graduated from high school I became inspired to see what I was capable of.

What is your musical inspiration?

My grandpa Norm was my first musical inspiration. He and I began listening to the songs he grew up with when I was a kid, and I witnessed the authentic passion he has for that style of music. Though he continues to inspire me, the research I have done since has led me to define who my favorite artists are from back in the day. The opportunity to continue their legacies keeps me driven and motivated to do their songs justice and never let them fade away.

My musical repertoire consists of any song that is considered a classic. I try to give them a certain flair that they have never had before without eliminating the essence of what made them great in the first place.

Are you working on any albums? What can fans expect?

I have a new album currently in the works. It has been a few years since the last album, but I want this one to be the perfect mix and sound that fit my direction. You can expect it to have covers from genres including classic country, soul and Motown in my own unique style. Of course, jazz standards will be included in this album.

What is your favorite part about performing live?

I love performing live but I am actually quite shy off stage. Once I get on stage, all of that goes away and I’m able to perform every song with all I have, giving classic songs the justice they deserve. Connecting with my audience, taking them on a journey, that’s what it’s all about. Then to receive the ovation after each song and especially at the end of the show—it makes all of the hard work and dedication worth it.  By Andrea Lerum

To learn more about Chris and view a schedule of upcoming performances, visit chrisandersonmusic.com