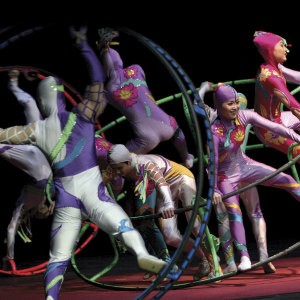 This fall, treat yourself to the beautiful and breathtaking performance of the Golden Dragon Acrobats. Since 1978, the group of 25 performers have traveled across the United States and around the world sharing their unique gift for gymnastics and theatrics with audiences. Hailing from the Cangzhou, Hebei province of China, the group is founded, directed and produced by Danny Chang, one of the world’s leading promoters of Chinese Acrobats. Audiences will marvel at acts such as foot juggling, which is exactly as difficult as it sounds; performers juggle various objects using only their feet often while balanced in a precarious position.

The art of Chinese Acrobats became an increasingly popular art form with emperors over 2,500 years ago. It quickly became a favorite form of entertainment across the country and for good reason. It was unique and took an immense amount of concentration to master.

What makes the art so fascinating is the performer’s abilities to take every objects like plates, hoops and vases and use them to balance, spin and demonstrate uncanny flexibility. Contortionists are able to bend their bodies and perform a myriad of stunts, sometimes including more than one acrobat and a number of props. Combining everyday objects with a flair for theatrics, athletic precision and gorgeous costumes all contributes to the art of Chinese acrobats. “These amazing athletes will dazzle and impress us with their acrobatic artistry and theatrical traditions.  China is credited with producing some of the best acrobats in the world, and we are thrilled to present this family-friendly entertainment to our community.  It is sure to be an evening of high-flying stunts and feats of strength!” say’s Anne Larsen, Marketing Director at the Washington Center for Performing Arts.

Golden Dragon Acrobats will be at the Washington Center for Performing Arts for one night only. For additional information and to purchase a ticket to this can’t miss event, visit www.washingtoncenter.org.